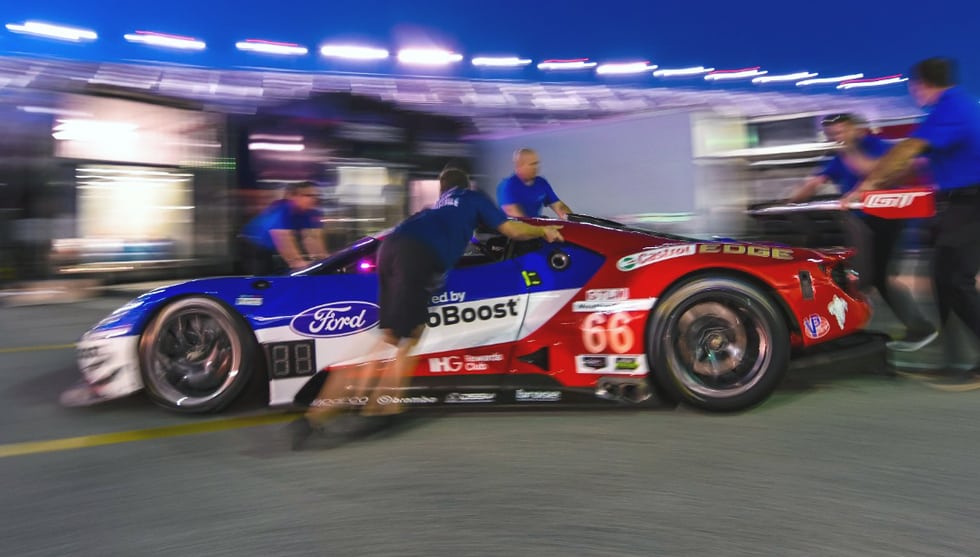 It didn’t seem the 55th-annual Rolex 24 could get any more exciting for Ford Chip Ganassi Racing. All four Ford GTs were united, competing together on one track for the first time since the Le Mans 24 last year. The team qualified p1-2-3 in GTLM. Then came the final 30 minutes of the race.

After starting on pole, the No. 66 Ford GT led much of the early hours. Then came the overnight stints and some of the most challenging conditions, between wet and the cold temperatures, the drivers had ever been up against.

In spite of it all, the same trio who propelled Ford to a GTE Pro win at Le Mans in 2016 – p1 qualifier Joey Hand, Dirk Müller and Sébastien Bourdais – charged up to the front again and again.

“The win made me very uncomfortable to watch. And sweaty,” said Hand, who with Bourdais watched Müller take the checkered flag with the No. 66 just as they did at Le Mans. “I told my family at home before I left that I had a good feeling about this race. I really felt like we could win. We worked really well together. That’s what makes a difference. The three of us together, you may not think a German dude, a French guy who has a bunch of IndyCar championships and a guy from California would work together the best, but we do really work well together.”

While it looked as if more than one Ford GT would make the podium, various pit strategies and cautions landed the No. 69 (Andy Priaulx/Harry Tincknell/Tony Kanaan) p5 and the No. 68 (Olivier Pla/Stefan Mücke/Billy Johnson) p7. The No. 67 Ford GT finished laps down after an accident in the Bus Stop in the treacherous overnight hours.

“It’s an incredible event,” Tincknell said. “You race hard from the start but it’s all about the last hour and keeping the car in one piece for that final flat out run to the flag…Overall, though, what a mega experience. The Americans know how to entertain; bunching the cars up and going racing in this way is incredible. There was some great racing going on and I really want to come back next year.”

“With any of these endurance races, there are many ways to win or to lose,” Bourdais said. “To be honest, we just didn’t put a foot or a wheel wrong.”

Both Hand and Bourdais thanked Müller for fighting off rival manufacturers for a riveting finish that landed them on the top step of the podium.

“Dirk just did it in the end,” Bourdais said. “It’s always that way in Daytona. It almost doesn’t matter what happens in the 23 ½ hours, everything matters from the last yellow flag.”

“I have to thank my teammates here,” Müller said. “To follow up to things Chip is always saying in our meetings, hand the car over as you would have it. We’re lucky I don’t have to hand the car over, because there’s a little scratch on the right-side mirror now from my move with the Ferrari (laugher), but what a race. Joey said it. I think to sit here is a big honor because we managed to win a very challenging race. I think the whole team a fantastic job.”

Ford’s history with the event in its current format stretches back to its very first green flag. In 1966, a Ford GT 40 won the first-ever 24-hour endurance race at Daytona.

“This is a great win for our GT program,” said Raj Nair, executive vice president of Global Product Development and chief technical officer, Ford Motor Company. “It’s a credit to everyone involved, from our Ford team to Ganassi, Roush Yates, Multimatic and Michelin. Conditions were very difficult throughout much of the race, but that winning car had no issues at all against some of the best competition in the sport.

There’s a lot to be proud of with this win and we hope it’s the start of a great season for our teams.”

The race gives momentum to Ford Chip Ganassi Racing for the rest of the year in both IMSA and FIA WEC competition.

“It’s a proud day for everyone at Ford,” said Dave Pericak, global director, Ford Performance. “We came into this race with a lot to prove after last year and it was great to see all four of our GTs run so well. The competition was amazing, and the 66 car guys ran a perfect race. It’s a great way to start 2017, and we couldn’t be more proud of everyone who worked so hard to prepare for this race.” 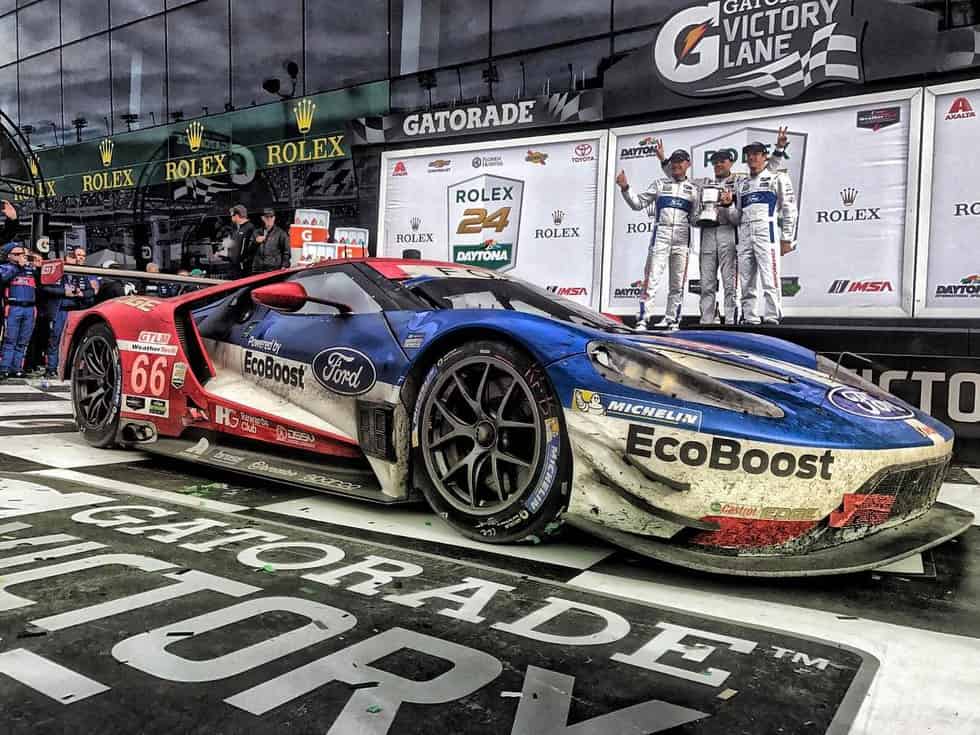